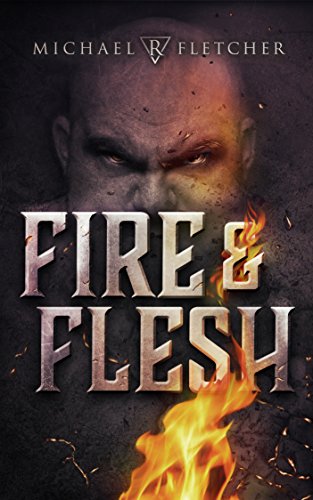 Where belief defines reality, delusion is power.
Michael R. Fletcher manages to say a lot in the 17-page grimdark fantasy Fire and Flesh: A Manifest Delusions Short Story.
To have such a descriptive style merge with a fast-paced, action layered story is pretty creative, and Fletcher is talented at being an all-rounder with his writing. Some authors are great are writing long epics with a lot of description, where action comes and goes at points. Others are great at writing shorter books with more blunt language that lacks detailed description and powerful world-building yet is filled with lots of action. Michael R. Fletcher can be highly creative, descriptive, and action-oriented all at the same time, all while telling the story from a first-person perspective that is more personal.
Fire and Flesh is a short story that precedes his Manifest Delusions series, sort of a “brainstorming” story where he was just coming up with the world Manifest Delusions is based around. The story follows a “Pyrocast”, a guy who can create fire with his mind, as he helps his captain navigate a foreign “inferior” kingdom. Seeds of imperialism and prejudice are rampant in the story as they interact with people from another culture less scientifically advanced than their own.
All of the major writing elements of Manifest Delusions is in this short story: the creative borrowing of German for names and certain abilities, psychologically-based powers charged by emotions and delusions, insanity, grimdark sword-and-sorcery fantasy, and social dynamics built around “savages” from outside locations and aristocrats. We see Fletcher’s ability to make unapologetic, unsympathetic characters we could grow to hate, while making them cool at the same time. In this respect, Fletcher’s treatment of social politics reminds me of Mark Lawrence, whose Prince of Thorns also looks at xenophobia and racism.
Fletcher’s world of deluded, greedy, and hateful characters with psychological powers gives a horrific feel of an unsafe and unbalanced environment while reading the story. At any time, the most powerful characters, the protagonist included (can we call him a protagonist?) can be driven by their emotions and thoughts to do the most heinous of things, and innocent people are not above suffering in the process. Even friendships and mutual relationships are ruined by these mental diseases which fuel the powers of these characters, and no real, intimate connection can escape being tarnished because of them. Fletcher must have did a great deal of studying psychology for the story, especially when it comes to being in the main character’s head. Although the character can narrate the story in a straight-forward way, and seems knowledgeable of his actions, we see how he is also demented, and enslaved to his mental issues despite possessing some ability to control them.
This short story is a good introduction to the series, or a cool appendix for those who have read the first, or even second novel, of the Manifest Delusions book series. The short story also serves as a good preparation for The Broken Dead, another Manifest Delusions short story that will appear in Grimdark Magazine’s Evil is a Matter of Perspective anthology.
Fire and Flesh: A Manifest Delusions Short Story is out now on Amazon.
Read Michael R. Fletcher’s interview!
Buy Beyond Redemption, the second Manifest Delusions novel, on Amazon!
Buy The Mirror’s Truth, the second Manifest Delusions novel, on Amazon!