I’ve been reading comics for about six years now, and in that time have read quite a lot of great comics. Here, however, for your entertainment, are my top ten favorite comics that I’ve ever read. The only rule is that I can’t feature a writer or writer/artist more than twice. This is a general top ten, so this is not a ranked list by any means. 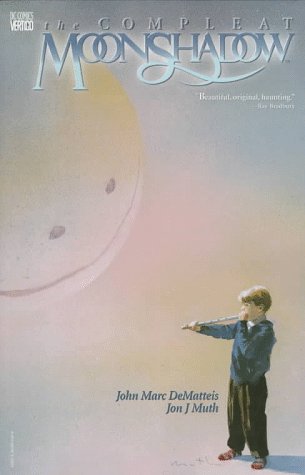 Author JM DeMatteis is best known for his turns on JLI and other superhero books (especially with co-writer Keith Giffen), but his less well known endeavors are fully-painted, spiritual, and deeply-intimate tales (another of which features on this list). With artist Jon J Muth, DeMatteis created Moonshadow, a tale of…well, to vastly simplify it, the adventures of a young half-human half-pseudodivine boy named Moonshadow and his abusive best friend, a fuzzy alien named Ira, who’s what you’d get if Oscar the Grouch loved booze and porn a little too much. Moonshadow and Ira travel the galaxy together, contending with war, sexual awakening, growing up, PTSD, death, relationships of all kinds, and more. It’s like if Douglas Adams and Kurt Vonnegut wrote a sci-fi epic about life.  DeMatteis prose is gorgeous, Jon J Muth’s watercolors are hauntingly beautiful, and the two create a work of literature for the ages. Moonshadow‘s sequel, Goodbye, Moonshadow (collected in The Compleat…) is a storybook-esque epilogue that can’t be missed either. 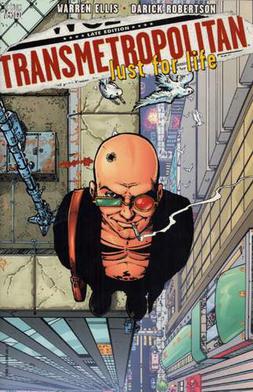 The saga of mad-bastard gonzo journalist Spider Jerusalem in the cyberpunk city he loves (and deeply, deeply hates) might very well be Warren Ellis’s masterpiece. Spider Jerusalem is based off of real-life gonzo journalist Hunter S Thompson of Fear and Loathing fame, except Spider would kick the shit out of Thompson in a back alley, steal his drugs, feed those drugs to his three-eyed and chainsmoking cat, and then climb a roof so he could piss on the heads of politicians. Transmetropolitan follows Spider as he gets roped back into journalism by contractual obligations and the threat of violence if he doesn’t complete his contract for two more books. Like a lot of Ellis’s work, it’s a strong mixture of dark and often absurd humor, bizarre sci-fi, sociopolitical commentary, and a surprising amount of heart. Bringing all of this to visual life is Darick Robertson (The Boys, Happy!, Wolverine) in some of his earliest comics work. He’s an incredibly talented artist, mixing strong character work with bold, colorful, and gritty cyberpunk worldbuilding. 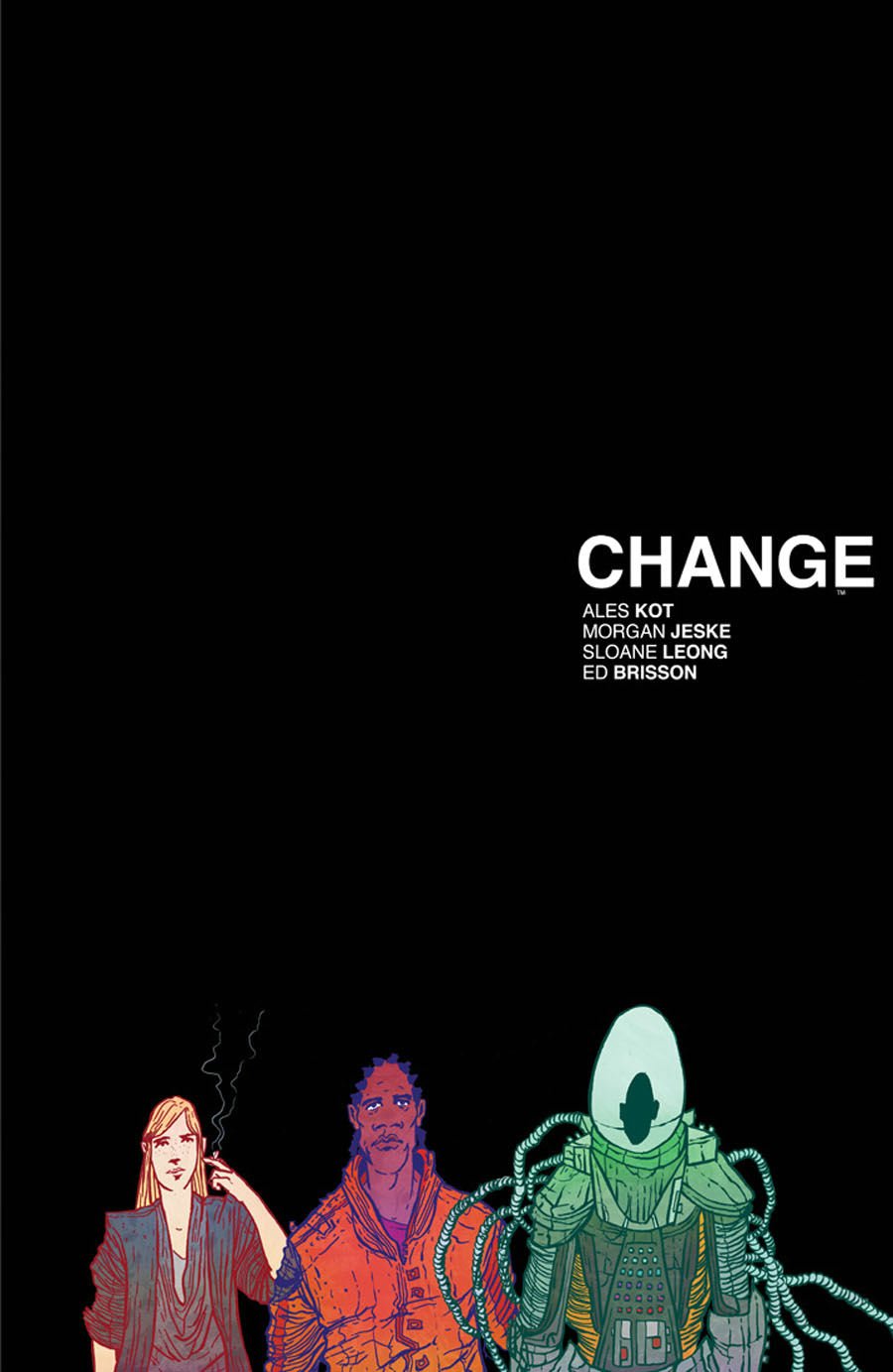 Change by Ales Kot and Morgan Jeske is revelatory metafiction. The story, on its surface, is about a rapper named W-2 making a movie about himself fighting Lovecraftian Ancient Ones when actual Old Gods start their “invasion” of “our” “reality”. Joining him is the current screenwriter for his film, the old screenwriter (known as Doublehead, who is a “fiction-suit”/stand-in for author Ales Kot), and an astronaut racing towards Earth. To say too much more would spoil the magic of this comic, but knowing the context(s) of the work, specifically how it’s all allegory and psychomagical healing for the author, takes an already great surreal Lovecraftian apocalypse story and makes it unmissible. It is, quite literally, a work of magic. Morgan Jeske’s art is unique and fascinating, and frankly perfect for the story at hand. 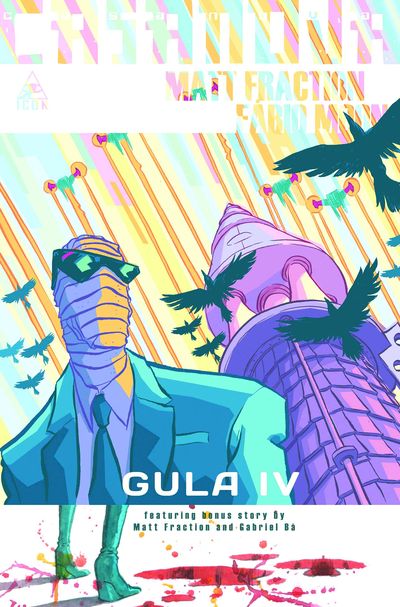 Casanova, by Matt Fraction and brothers Gabriel Ba and Fabio Moon, is like James Bond filtered through sex drugs & rock’n’roll. The plot is expansive and wild, but it all starts when Casanova Quinn, black-sheep of the Quinn family (which runs E.M.P.I.R.E., a super universal secret agency) is plucked from his reality by the nefarious and mysterious Newman Xeno (leader of EMPIRE’s nemesis, the organization W.A.S.T.E.) and snuck into the place of the (secretly murdered) Casanova Quinn of another universe, one where he was the good child. Sound like a head trip? It is. The story from there involves sex robots, universe-hopping, physio-psychic battles, gleeful and/or scathing metacommentary, David Bowie, and acid-washed spy tropes. It bleeds style and a pop-gonzo “fuck it” attitude. Amidst the trippy and sexy whirlwind of the various plots and the style is a decent amount of heart and soul. You can just tell everyone involved is having an absolute fucking blast with making the book. Like music, it speaks in emotion and sensation. And it’s all the better for it.

Casanova has three of its seven volumes completed, with the fourth coming out now. They’re all titled after the latin name for one of the seven sins. The notable gaps in publication of each volume create an interesting dynamic between the individual volumes, as writer Matt Fraction comes to each volume a stronger, different writer. For a book that expresses itself in emotion, that dynamic is fascinating and perhaps even crucial.

A long lost Vertigo miniseries that got reprinted by Boom Studios, The Last One follows the gender-fluid immortal (currently) named Myrwann, who left their kind to serve as a guardian angel of sorts for humankind. Myrwann’s been helping humans since the beginning of humankind, and all of the suffering and horror and despair and tragedy they’ve witnessed has slowly eaten away at them. The story starts takes place in 1990s New York, with Mrywann providing housing and care a cast of characters suffering from abandonment, addiction, and more; all while their mental state slowly deteriorates, becoming more volatile, prone to tantrums, and occasional outbursts of violence. Joy and despair, success and suffering, trust and doubt, love and violence; the darkness threatens to overwhelm those who have suffered so much and seen so much suffering. Yet for a book filled with darkness, it is also one of hope. It’s masterfully told by DeMatteis and artist Dan Sweetman, and it will stick with you for a long time after you’ve closed its pages.

I’m sorry All-Star Superman, I love you dearly and you were so close, but I have to give my pick to Doom Patrol. Grant Morrison and Richard Case’s increasingly surreal superhero epic is a wonderful series full of richly-written characters, bizarre as hell stories, and a willingness to break the rules of superhero comics. It’s what the X-Men concept frequently pretends to be: the story of the truly outcasted, the “abnormal”, the marginalized. This is a series that will break your heart, and maybe even your expectations of what a superhero story should be.

I wrote more extensively about Doom Patrol here, if you’re so inclined (and okay with massive spoilers)

IT’S POST-NUCLEAR SCI-FANTASY FILLED TO THE BRIM WITH PUNS AND BRANDON GRAHAM’S GORGEOUS FRIGGING ART AND STORYTELLING WHAT MORE DO YOU WANT. 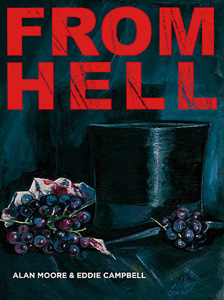 From Hell is a labyrinthine, extensively researched tale about Jack the Ripper. The story is told from a number of perspective, including a conservative detective, a trusted psychic, and the Ripper himself, William Gull. Though Moore and Campbell disagree with the theory that William Gull, the Royal Surgeon, was responsible for the crimes, and that they started as part of a royal decree to cover up a prince’s affair with a prostitute, Moore described it as a good jumping-on point for him to dissect the killings and their impact. It’s a dark, brutal book, accentuated by Campbell’s sketchy lines and thick shadows. It also pulls no punches, with one chapter contrasting the Ripper pondering it all with very graphic depictions of the Ripper cutting one victim into pieces. If you can stomach some graphic violence and intense darkness, you’ll find a masterfully told rumination not only on Victorian Era England, but the Ripper murders as a hypothetical starting point for 20th century violence.

First of all, Farel Dalrymple’s art is truly incredible. The dystopian nightmare world that The Wrenchies inhabit is one of disease, of rot, of horror, and Dalrymple captures all of that with strong worldbuilding and grimy and thick paints. The story is expansive, tackling three-plus interweaving narratives that place the story in different contexts. Two brothers in the woods discover the Shadowmen, and the eldest disappears. A gang of kids known as The Wrenchies roam the diseased wasteland, avoiding the ever-present Shadowmen. Hollis, a lonely young boy from New York, gets pulled in through a Wrenchies comic and works alongside them to defeat The Shadowmen forever. The younger brother from before, Sherwood, is now a narcotics-abusing and very depressed artist who not only created The Wrenchies but lives next door to Hollis. The narrative/s only get more complex from there, but it’s universal themes keep it grounded and accessible. 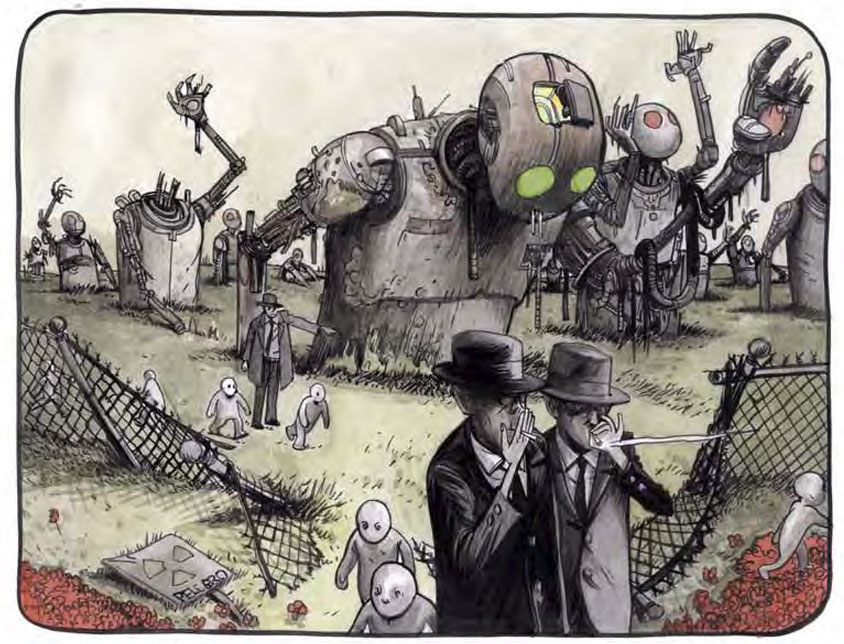 And finally, Zero by Ales Kot and 18 different artists (one per chapter). I’ve  sung the praises of Zero extensively on this website and to my friends an extensive amount, so I’ll keep it brief. Zero follows Edward Zero, a former child soldier in The Agency, as he tries to break the cycles of violence he’s trapped in. It’s an arthouse, meta war-comic that’s methodically constructed, poetic, disturbing, beautiful, and profound. Honestly it’s my favorite comic on this list, and that’s saying something.

What are your top ten favorite comics? Post in the comments below, or if you write for this website, create your own list! I can’t wait to see your favorites are!

She most definitely is NOT a dirty meme-loving lizard-woman.
More posts by Alice Hudson