Spoiled by this post-Comic Codes era, I usually like to read dark comics with grit and grime, often written for mature audiences. It’s just a personal preference. I like the superhero genre that has dominated American comics for over a century due to the code, but when I read indie comics, I usually like to see something gritty within that genre or expand beyond it. Even with the more popular comic houses, I like a darkness in superhero comics with some exception. My bias for darker comics was challenged by Chess Masters, which goes back to the more clean, kid-friendly crusader-style part of the superhero genre. With this challenge, I looked at the comic and what it is within its market, opposed to going by my own love for grimmer material.
Overall, it’s good, enjoyable and entertaining within his genre. There’s a little blood, but not much. The fun theme of costumed superheroes that we came to love and enjoy as a kid, without the extreme violence, is there. Appropriately named, each of the Chess Masters teammates are named after chess pieces- King, Queen, Bishop, Knight, and Rook. It’s a fun idea.

When looking at Golden Bradley and Gary McClendon’s Chess Masters #1 and 2, distributed by Insane Comics, I was happy to see that he is working with Marcelo Salaza and Geraldo Filho. Marcelo Salaza is the artist who drew Empress #1-7 for Chuck Amadori and me. Geraldo Filho is the current colorist from Empress. This made me familiar with the artist and colorist that Golden Bradley chose to work with, who I already like, so I’d like to look at the art first.

For Chess Masters, Marcelo Salaza seemed to be going for a more strong-lined, pulp comic style which works for the story, which seems to go for the classic superhero approach. Geraldo Filho’s coloring style is bright in this comic, which also mixes for that classic comic book feel. I like how Marcelo draws the backgrounds and props, especially when it comes to applying textures for dirt and more complex settings. There are a lot of military scenes in the beginning, so there are lots of helicopters, tanks, and things of that nature, which shows Marcelo’s ability at drawing vehicles. 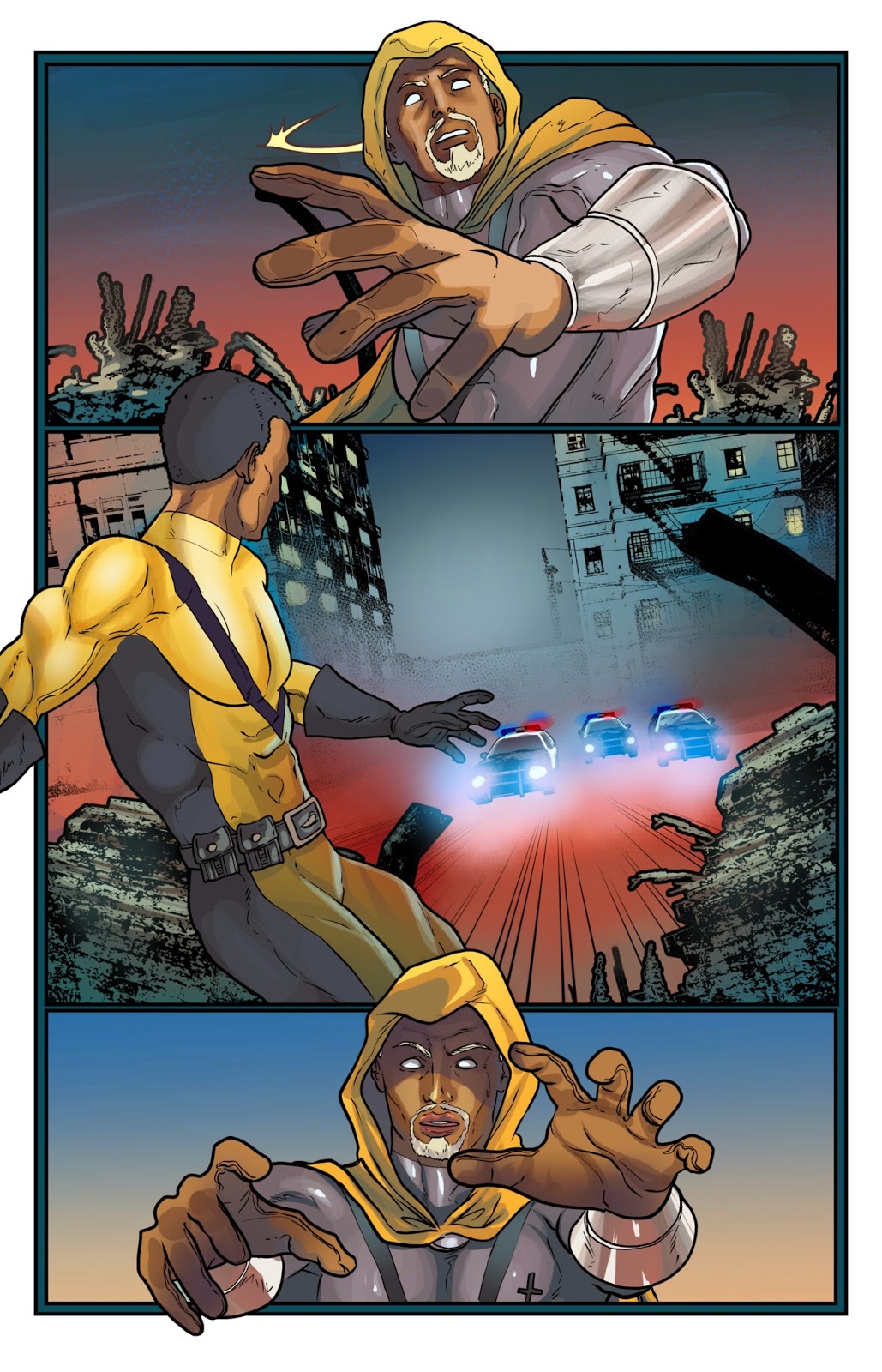 Out of the two issues I read, the first issue is more action-driven and less dialogue heavy, while the second issue shows more of the plot-line and character development. For action fans, the first issue may be a favorite if they read Chess Masters, and it’s a good introduction story-wise. The first issue shows these heroes being propelled into a time they aren’t expecting, and facing danger due to being super-powered and deemed a threat. Personally, I’m more of a plot/intrigue/motivations guy to start the story, so I appreciated the second issue way more than the first, but I understand how it works to start the story with lots of action to get people interested in the characters and their circumstance. So the writers did a good job in deciding for issue 1 to be set up the way that it did. 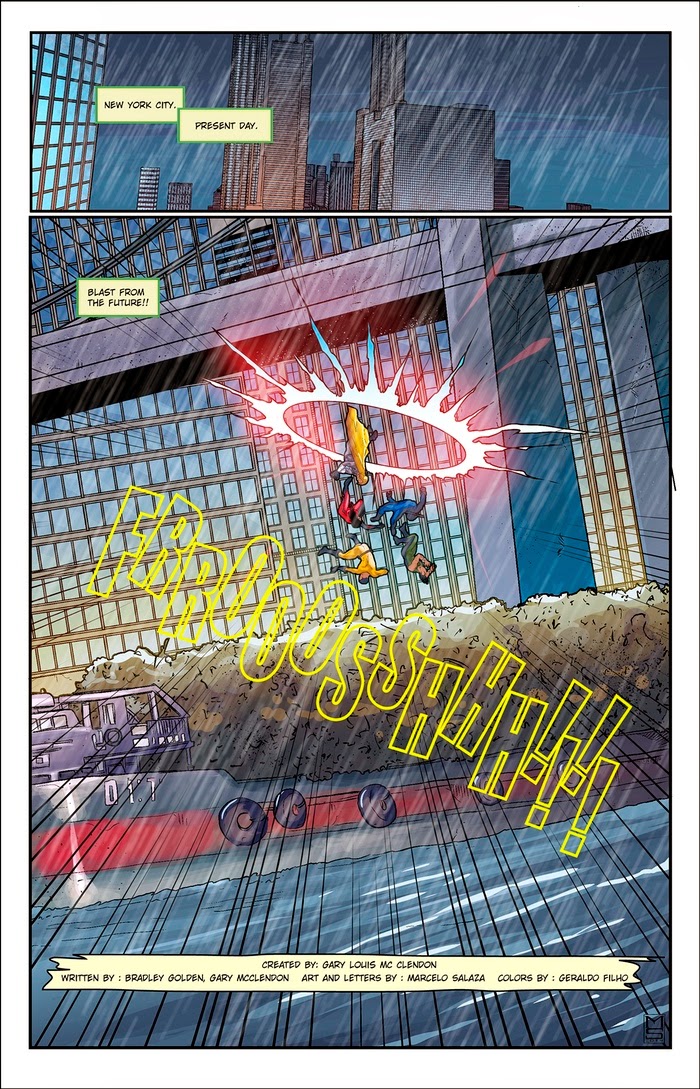 Since I like bad guys, my favorite character is Pawn Master, of course. For me, he had the best scenes, mainly in his interaction with Sinevil, who seems more evil than Pawn Master. Pawn Master is not a villain without cause- there’s a reason he’s chosen the side he chooses beyond just being “bad”. And he has ethics to some extent as well, rules and ideals that Sinevil seems beyond, as Sinevil seems more primordial, chaotic, and boundless. 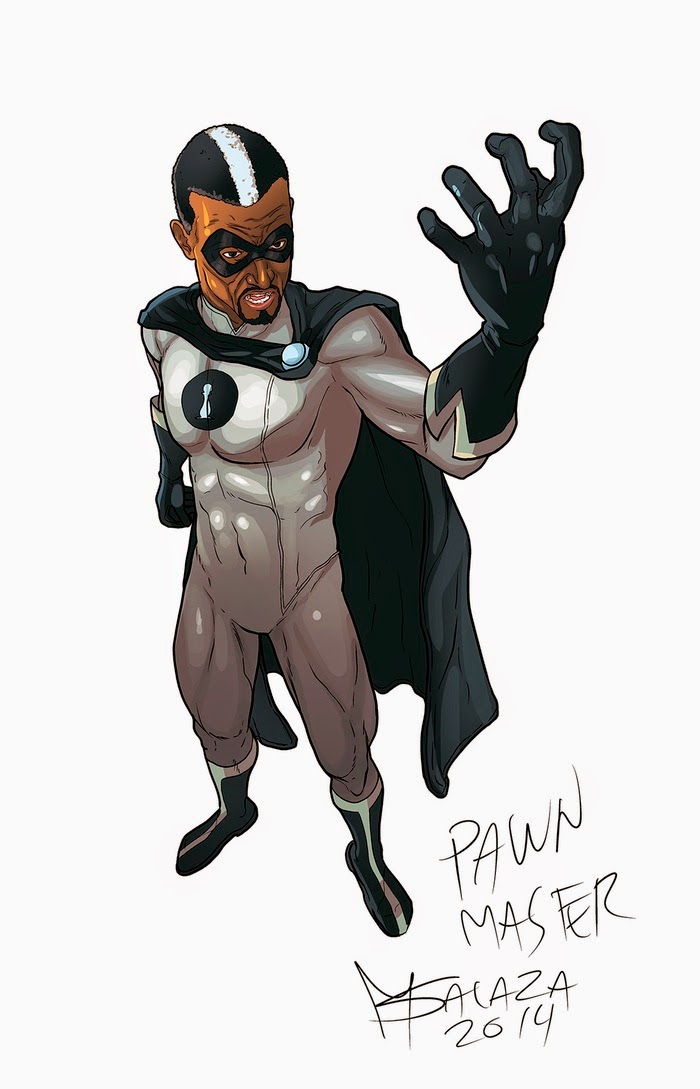 The action also works with how the comic seems to be more for a universal audience than just adults or kids. There is a lot of action, but the superheroes operate under the “no kill” rule, so it seems safe for people of most age groups to read.

Chess Masters is named appropriately, illustrating how the superhero team and its main arch nemesis, The Pawn-Master, make strategic moves against each other in a 25th century, near-utopian city. The Pawn Master sends the Chess Masters back through time to the 21st century where he has an advantage, with many associates to help him. In this past, the Pawn Master seems to have a stronger chance of defeating his foes and going about his evil plans.

Story-wise, this is part of the superhero tradition, probably the most visible tradition in American comics. Fans of this genre who are open to superheroes outside of the bigger comic book industries would like it. The background of the story is established, and the reliance on action is strong. The aspects of the story, from costuming to time travel themes, reminds me a lot of X-Men comics I grew up reading in the 90’s. Though the concepts are familiar, they’re still fun to read, and the creators of Chess Masters make them their own in their way. I’m glad I read it and had my preferences challenged. If you like classic superhero comics and like a break from the possible over-saturation of dark themes in comics today, then Chess Masters would be a good comic for you to read.

Thank you very much, Mr. Brian Barr, for the kind and awesome words! God bless you, sir. -Gary Louis McClendon-

Yeah great review Chessmasters are ahead of their time.