I was able to look at Bill McCormick’s comic, Legends Parallel, which he wrote with Dorphise Jean. Leslie Tejlor and Brian Daniel served as artists, with the character designs created by Brian Daniel and Sherrie Vanilla Hardy. Alexander Malyshev did the cover.

The comic is DEFINITELY for adults. Yes, for anyone who just took a time machine from the 1960’s, adults read comics, too. As any comic for adults should be, this comic is grown and sexy. 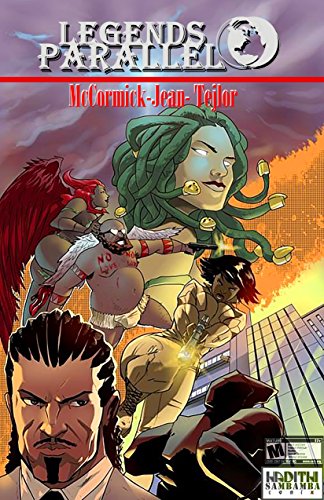 It’s cool how big of a team took a part in the making of this book, which proved to be weird and entertaining. Character wise? There are many. Well, there’s Oshun, a sexy redheaded woman with seductive powers, Bes, a chubby cherub guy that looks like he’s in his forties while wearing nothing but boxers and glasses, and Saifu, a businessman/scientist who is also a crimefighter (of course… because what’s weirder?), and an assortment of other characters, from the crimefighter’s mother to a beautiful woman with metaphysical powers. The story is set in Chicago.

I like the art style. It’s an indie style that’s simple, clean, and bold, especially with shadows which are very strong. The backgrounds are the best part of the work, especially with buildings and rooms. I also like the drawings of faces and women. The colors are bright and glossy. Proportions wise in some panels, drawings aren’t always spot on, but most of the time, the art is good. The cool style and the story makes up for the slight technical flaws in proportion. I also like the variety of angles in different scenes, which helps to get the story going. The story revolves around multiverses, which the businessman/scientist protagonist has studied and discovered is real. The businessman is also a costumed crusader at night… but he doesn’t know that there is another costumed crimefighter in town, and she’s aware of his secrets. As they talk things out, neither crimefighter knows that they are being watched by evil forces.

This comic was cool to read, and I want to read future issues. It looks like the creators have a lot planned for this comic, as they worked with real-life models to pose as their characters with pictures in the back of the book. Pretty cool for a collaborative project.

Legends Parallel has it’s own website which you can find here: http://www.legendsparallel.com/

Superhero creation can be a tricky business. Superheroes as we have come to know them have existed since 1938, when…

In this fan made trailer from 2007, we are promised a new take on Star Wars that trumps all other…

Thanks Brian for the love our team Greatly appreciates you…