Hiya there! I’ve been absent for a little bit, been working on some projects and a family vacation that sapped up a lot of my time. But I’m back, here to do a new segment where I do mini-reviews for three graphic novels or general comics editions I’ve read recently. “But enough of the preamble. Now, to the amble.”

Ballistic is what would happen if Transmetropolitan and David Cronenberg had a mutant baby that wants to be an organized crime boss and does a number of sentient hallucinogens in a landfill. To put it more bluntly, it’s biopunk pulp fiction, it’s fucking nuts and I love it. The story essentially follows a repairman named Butch, and his talking bio-gun Bang-Bang, the former of whom wants to be a big-time crime lord. They live on a biopunk island of trash after everything imaginable went to shit in the world, and catch their big break when somebody induces a mass biotech psychosis. It’s 5000 things at once and I’m not sure if it ever fully gels into a perfectly cohesive narrative, but it’s too much fun and far to involving to shrug off. The world is extensive and fully realized (read the author’s annotations in the back of the book, it’s worth it), the writing is often funny, and it’s two central characters are worth following. And Darick Robertson’s art, oh man, oh boy. He nails it here, creating a bizarre, rich visual playground of absurdities and horror. Robertson takes the skills he cultivated on Transmetropolitan and other titles and pushes it to the extreme. The back of the trade paperback, which describes the whole series as “the hard sci-fi worldbuilding of Transmetropolitan…The Boys’ ultra-violence and the lunacy of Happy!“, and that’s a pretty solid description of what you’re getting into. Sure, it’s a flawed narrative that sometimes loses narrative cohesion amongst its legions of ideas, but it’s just so enjoyable, oftentimes clever, and really just pure fun to pass up.

4 out of 5 darkly funny biopunk oddities 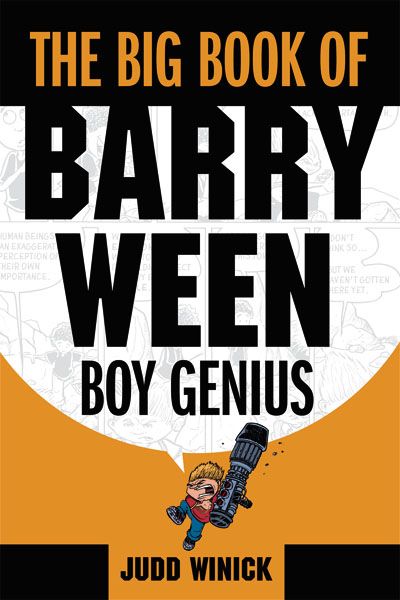 Imagine Jimmy Neutron meets Calvin and Hobbes with a penchant for profanity like Tarantino and you’ve got a pretty good idea of what you’ll get with Barry Ween Boy Genius. The story follows the hyper-intelligent and truthfully kind of dickish Barry Ween, a boy-genius with a temper and an ego to match his science skills. Following him on his misadventures (and usually causing them) is his rather lewd and not so smart friend Jeremy, and Barry’s secret crush Sarah. The story, while generally very funny, has some problems, like Jeremy’s tendency to sexualize cisgender women and actively perpetuate misogynistic ideologies (which, however, Barry calls out a number of times throughout the book and seems like an intentional choice understood by the author). Jeremy’s character can be deeply problematic, but the author recognizes this and speaks against it through Barry, which takes some of the sting out of Jeremy’s character. Truthfully Jeremy’s propensity for boorishness is set up to be laughed at and called out, though sometimes it pushes it a little too far. Despite its problems, its strong albeit often lowbrow humor gives it a lot of mileage. Yet even more than the humor, the relationships and generally strong character work are what sold me on this book. Barry himself, and his relationships to Jeremy and Sarah, are surprisingly heartfelt and complex. Underneath all of the shenanigans and low-brow humor lies pathos and Barry’s deep and multi-faceted relationships with Jeremy and Sarah. To say more would spoil the book. If you can get through some of the (intentionally?) problematic and obnoxious behavior of Jeremy, you’ll find fascinating and captivating character/relationship dynamics.

3.5 out of five problematic faves

Rick Remender is a writer I have a complicated(?) relationship with, though my feelings about his writing tend to gravitate overall towards the positive. I enjoyed Uncanny X-Force and I’m still enjoying Deadly Class, but I seem to be one of the few who didn’t really dig Black Science all that much (though to be fair I will reread it again). I like Remender overall, but I’ve rarely been enamored with his writing. Low epitomizes my relationship with Remender. Some of Low is really good in the writing department, especially some of the creativity on display; but it’s also can be dragged down by cliches and some hackneyed, unsubtle dialogue and characters, especially in the early chapters. As much as I can appreciate how personal of a project this is for Remender, the themes of hope vs pessimism are beaten like a dead horse, and from this theme stems some of the hackneyed and unsubtle dialogue I mentioned earlier. One particular conversation between mother and son caused me to groan out loud. However, Remender seems to find his footing more and more as he goes along, and by the end of volume one I was engaged and curious to see where Remender and Tocchini were going to take us. Speaking of Tocchini, his art is a mixed bag leaning more towards the positive. A lot of his art is dreamlike and frankly really pretty (just look at that cover!) His designs for the world of Low are inspired and inventive, and have an ethereal quality to them. I can’t imagine anyone else but him doing the art for this book. However, sometimes his lines are too loose and it can de difficult to tell what’s going on. Most of the time it’s pretty clear, but he sometimes sacrifices clarity for style, like trying to figure out the setup and boundaries of an immersive space. In the end, Remender and Tocchini craft a narrative that compels me to read on despite its flaws.

You may have noticed I said nothing about the plot for this book. Such information was not included because going in with little knowledge of the book’s story and characters helps one to immerse in the narrative Remender and Tocchini have created. Trust me on that one. 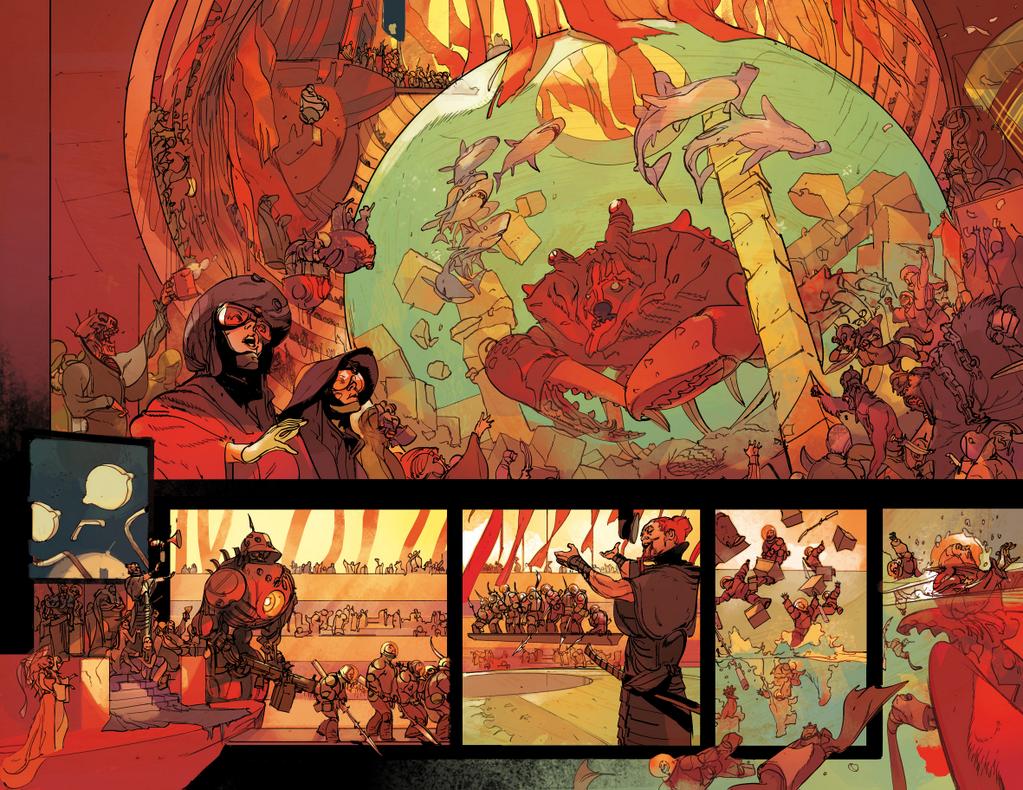 She most definitely is NOT a dirty meme-loving lizard-woman.
More posts by Alice Hudson